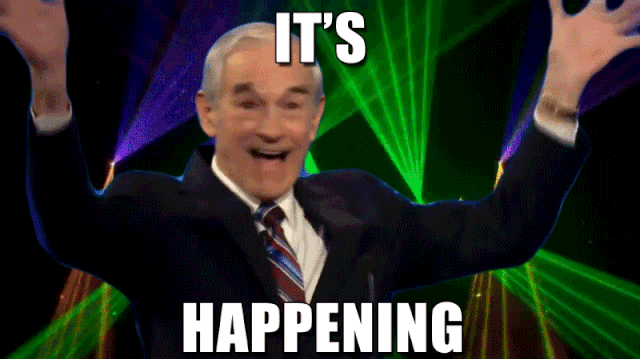 Well that was fun. Remember when I posted way back in September of something coming soon? Soon was a relative term to mean “not yet…no, not yet…Joe, back off…it’s 2am Joe, stop calling!”

It started in March just after Project Albatross Milkshake, with Terry and I talking about how to incorporate some of the feedback we’d been receiving a steady diet of since our Appsumo launch. There was just one catch: it theoretically was going to require a partial rewrite. We had lots of back and forth trying to negotiate with each other on the future of the platform and how it should work. Conversations got heavy and we decided to do something about it.

Why just replace the kitchen counter top when you can tear down the house and build a mansion?

We recognized that what I wanted, what he wanted, and what we were able to do was not so simple as rolling out a new screen, some buttons, and a snazzy report or two.

The Project Albatross Milkshake update brought in an improved discovery engine and influencer cards to help brands, updated dashboards, and what we thought was a better messaging system. What a cute little update in retrospect.

Here’s the problem though; we were closing in on our 1 year as a SaaS and as many of you know, that’s the magical time when systems are overhauled. When we initially pivoted to a platform that recruited both influencers and brands, we kept our initial systems architecture and tried to make each square shaped peg fit into that round hole. However, what we really wanted to do was going to require a very unique shaped block and there was just no way to do it. Compound that with a platform that kept growing (closing in on a 1B audience reach), and we were at a breaking point.

It was Kaufman time. Eric Kaufman and I used to develop tax software for a large accounting firm in another life, so if there was someone that could help me architect it out all from a needs and process requirement, it was him. Thankfully we was able to get some time with him and other members on his team (Hi Josh! Hi Tushar!) to do this correctly rather than treat the system as a series of hacks.

2. How can we incorporate all the feedback and proactively address expected future concerns?

3. What does the underlying architecture need to look like to support all that functionality, even if it is forward looking and not coming today?

4. Sketch out every single screen and action before writing a single line of code [Terry and I operate a bit quickly sometimes, so as get-it-done-immediately-if-not-sooner guys we can get caught in our own traps].

5. Code out the screen interaction in a way that will work within the new framework and can be more easily extended.

Long story short, it took a lot longer than we expected and cost a lot more than we initially conceived, but it is going to be so worth it. I’ve been chomping at the bit for this to be released for months, and now we’re ready. We’re so ready we ate some incredibly hot Carolina Reaper pepper chips for charity and moved offices so we can continue to grow in our endeavor to support you.

If you’re a current brand or influencer, you really don’t care about all of that though — you want to see what’s changed. Well, everything. When you login next, we have help tutorials to guide you through each section and built out a FAQ to assist you. Here’s some of the major changes though. 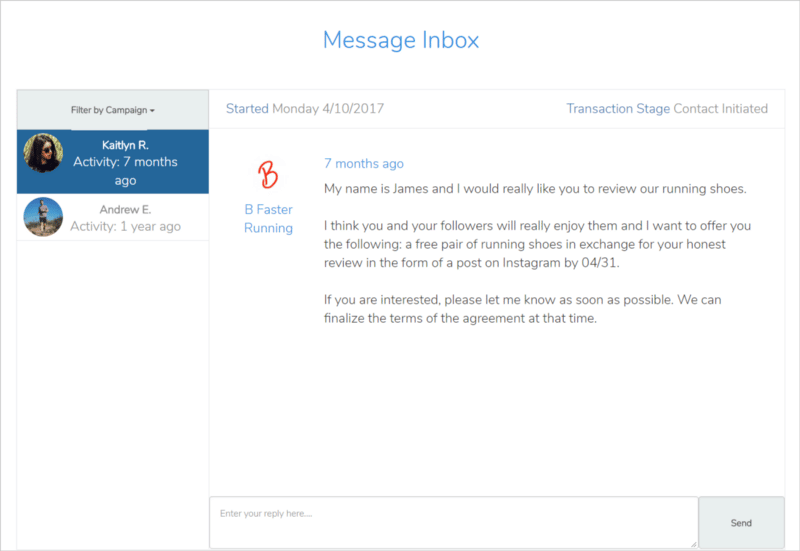 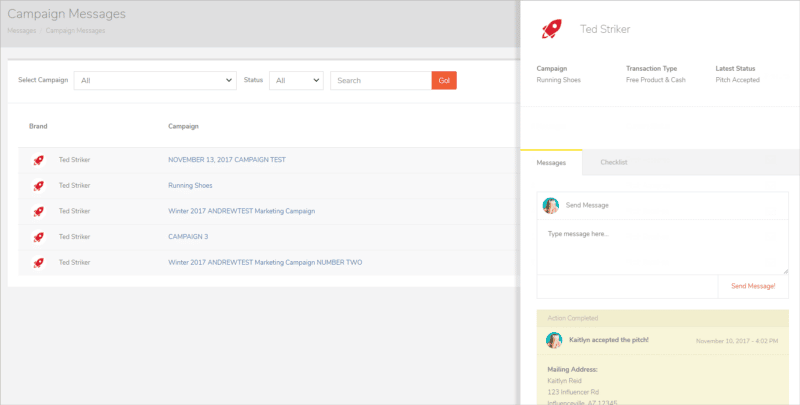 Active brands with more than one campaign were struggling to juggle multiple conversations without mistaking influencers, transaction phases, etc. The new messaging change is really significant, as it is multi-threaded and makes it abundantly clear who is responding to what, where they are in a transaction, and what you need to do to move it forward. 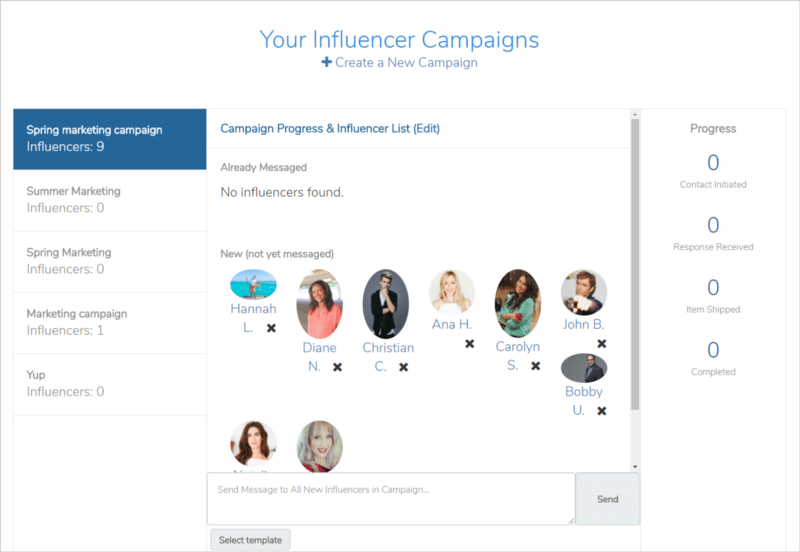 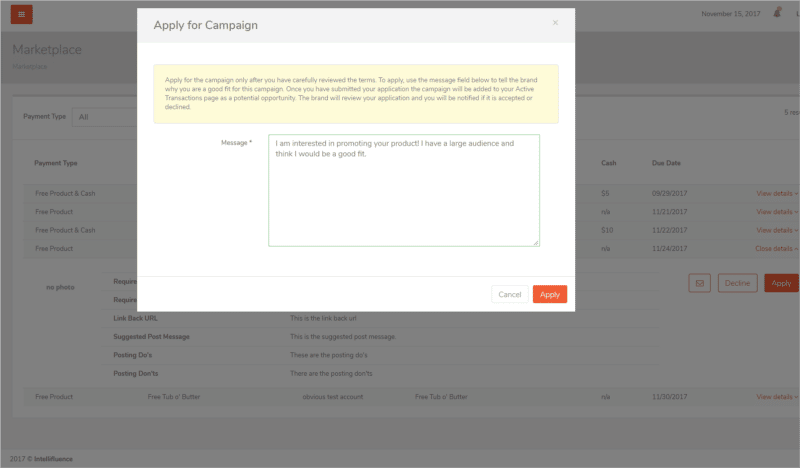 A new and very heavily requested feature was the option to let the system work for you. Have an offer but don’t want to pitch? Not a problem! You can now set the offer to show in our marketplace; based on the filters you set for your offer, every influencer qualified will see it in their feed of opportunities when they log in next.

Yes my lovely influencers, that also means you can finally pitch the brands you want to work with, so long as their offers are made public to the marketplace.

If you are a current Intellifluence subscriber, all of your existing campaigns will be moved into the new system and set to “archive,” as we want to give you the ability to make the decision on what campaigns you want to continue. This means they don’t count against your plan allotment but all you have to do is click Edit Campaign, scroll to the bottom of the screen, uncheck the Archive option then click Save to make the campaign active again.

We are here for you.

As we’ve grown we’ve been the target of scammers. It happens. To help combat that, we’ve created a separate transaction elevation system that lets brands or influencers let us know immediately when they think something is wrong — it could be anything from flagging a spammer that is trying to get you to join his affiliate program as compensation when you clearly don’t get out of bed for $1000; it could be an influencer that is trying to scam a brand by taking money and not performing; it could be to highlight a bug you’ve found. We build new controls to make it easier for our eager and enthusiast support team to dive in fix the problem. 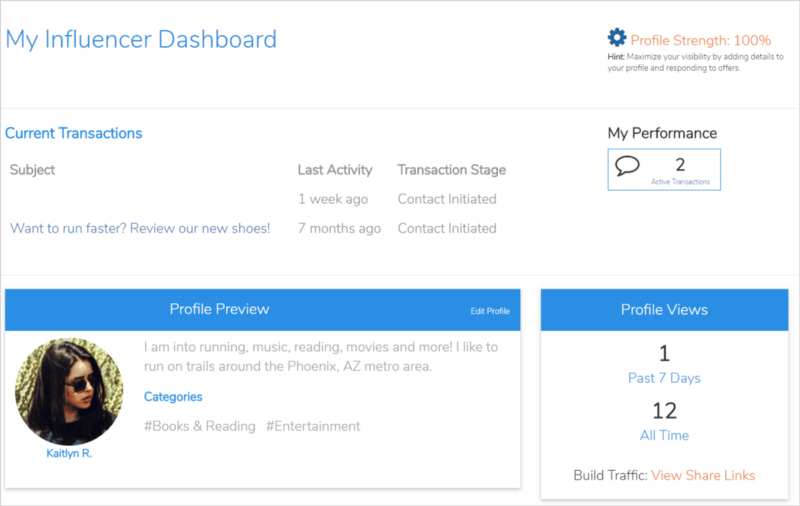 Newly expanded to help influencers stand out and help brands find the perfect people for their campaigns.

We have new data partners (and lots of oAuth) to get faster updates on social profiles and a better method of assessing blog quality thanks to LinkResearchTools, so finding the right people is going to be easier.

And there’s so very much more; some of it you’ll quietly discover as it makes your life a little bit more efficient, and some we’ll talk about in a future post as we kick off our influencer interview series. Let’s talk pricing.

Like with all our previous updates, we grandfather in plans. If you were with us in the very beginning on the single plan at $9/mo guess what? That’s now a $900/mo plan; you’re a very smart person.

Marketplace — this is an entirely new plan; it is for those of you that don’t want to pitch and just have a single product. It is also the perfect plan to dip your toe into Intellifluence for testing. What’s in this plan? You have the ability to create one campaign and receive up to 15 influencer applications per campaign. Your campaign will be visible in our public Marketplace for 15 days and you get access to reporting and analytics for your campaigns. We consider this “the plan to wet your appetite.”

Marketplace Plus — previous Intro plans will map to Marketplace Plus. What’s in it? Improved value, that’s what. With this plan, you will have the ability to create multiple public campaigns (up to 3), receive up to 50 influencer applications for each campaign and you can also pitch up to 50 influencers from our network comprised of over 25,000 influencers (and growing each day). Your public campaign will remain visible in the Marketplace for 30 days and you get access to reporting and analytics.

Enterprise — previous Pro plans will map to the new Enterprise. This plan is our unlimited plan; agencies and resellers are going to love this. Basically, you control your destiny here. You can create unlimited campaigns, receive unlimited applications from influencers, pitch as many influencers as you want, your public campaigns will be visible in the Marketplace for how ever long you desire, you get full access to reporting and analytics, you have the ability to make your campaigns private so they don’t appear in the public Marketplace and you can pitch individual influencers of your choosing. Oh, and you get a friendly dedicated account manager.

White Glove — want someone to handle all aspects of influencer marketing for you? For spends over $10,000/mo, Intellifluence in coordination with Digital Heretix will build your campaign and run it for you. We’ve been putting this off until we had a system that would allow us to juggle multiple large campaigns at a time, and now we can.

We make it really easy to move among plans too, so if you start at Marketplace and work up to Pro you can always work all the way back down to the Marketplace plan; your data will be kept and various campaigns archived so that when you upgrade again you’ll have access the locked away features and unarchive campaigns.