By Andrew Evans|2021-01-29T22:10:36+00:00January 29th, 2021|
Nina Cole | Influencer Spotlight 115
Nina Cole has worked with some of the top pet brands reviewing attire, products, services, pet-friendly hotels, and places. Nina is the founder of Nina’s Nannies for Pets, an award-winning pet and home sitting service based in the United Kingdom. Nina also started a blog called When Nina Met Ellie – Magic Happened, which features reviews and articles mainly focused on her relationship with her rescue Cockapoo Ellie. You can learn more about Nina at whenninametellie.co.uk or learn more about Nina’s Nannies for Pets at ninasnanniesforpets.co.uk!

Can you tell us a little bit about your background and what led you to start Nina’s Nannies for Pets?

The main reason was because when I was 38, my husband was diagnosed with MS and six months later I had a brain hemorrhage. So it was like a double whammy, and it made me realize my dream of working with animals. To be fair, I was never clever enough to get through vet school, but I saw a gap in the market because in the States, pet sitting was really beginning to take off. Whereas, in the UK, nobody had really heard of it. So all my research I did through the States and I spoke to one lady that had a really good business out there. I got the local newspapers involved and they actually helped me to do my launch, and that’s been going now for 23 years.

Related: Can I create multiple brands within my account?

Then last year, I would say pretty early on during the pandemic, because our business had evolved, so we were no longer sort of doing dog walks or pop-in’s, we were more of an agency, so I had quite a few people working for us on a… It was really sort of a basis, we didn’t employ them, they were self-employed. Most of them, funnily enough were, in their fifties, sixties. So we had retired school teachers, police officers. So they were mainly retired people, and to be fair, it was a bit like a weight lifted off my mind, and I just decided, “Do you know what? I really don’t to do this anymore,” and we just took the opportunity to sort of retire everybody, really. 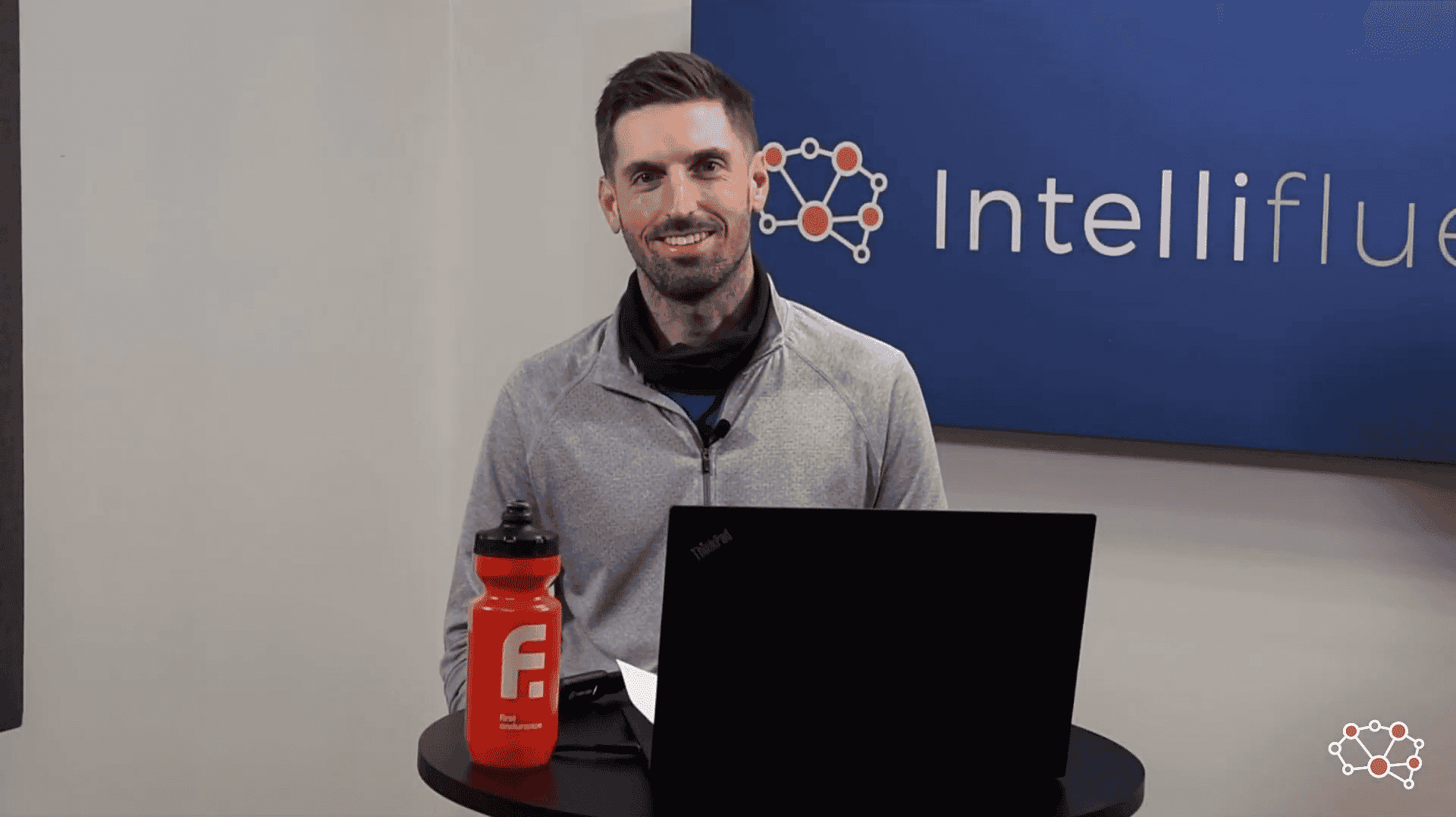 I knew that I wanted to do something else with animals. So at the time, I had a lifestyle Instagram account, and I thought, “Do you know, this isn’t me standing around posing in different dresses.” So I thought, “What am I best doing?” I’d worked with a lot of brands whilst I was doing Nina’s Nannies for Pets, and I thought, “Why don’t I just transfer my skills and have Ellie join me?” We just started reviewing different products and it’s really taken off from there.

At what point did you start the blog?

Well, my blog has been going for quite some time. I’ve got two now. I’ve still kept the old Nina’s Nannies for Pets blog because that’s got obviously a much higher… What do they call it? Page Rank…?

Yeah. There’s different website metrics. Page Rank, Domain Authority, Trust Flow are some of the ones.

That’s right, domain authority. So I’ve kept that and I started a new one, so I’m utilizing both of them. The other thing that I found I really do enjoy, because I did use to guest on the BBC local radio back in Bedfordshire where I lived and I really enjoyed that and I missed it when I moved to Dorset, so I now try to do a live on my Insta with different people from vets, people that are starting up new businesses. I think it’s really nice to try and be a bit versatile on your account.

You mentioned earlier, Nina’s Nannies for Pets kind of started based off a trend in the United States of pet sitting. And so I’m interested about another trend because I’ve only seen this in the city that I live in here, but I’ll be running down the street and there’ll be a couple or there’ll be an individual and then they’re pushing a stroller, and you’re like, “Oh, yeah,” and it’s their little dog in the stroller. Is that a thing overseas?

How could I put this very tactfully? You don’t see it very often in the UK.

Yeah. I haven’t seen that anywhere else but the little city I live in. It’s not a little city. The city that I live in, it’s like a baby stroller, a carriage. Yeah. It’ll be a little dog in there. So it’s an interesting phenomenon, to be sure.

I think it’s really Paris Hilton, isn’t it? Didn’t she start that trend?

She might have, yeah. I remember with the Chihuahua. Yeah. Maybe, maybe. And so how did Ellie come into the picture?

So I guess I’m a bit broken down because I’ve had quite a few health issues. I’d always had German Shepherds up until a couple of years ago, and we lost our German Shepherd. I just didn’t feel at my age, because I’m a bit older now, and I really wanted to get… What are you doing there? I really wanted a cockapoo, and I knew that I didn’t want to buy one, I wanted to go for rescue. And this little cockapoo just pinged up on my phone because I’d programmed it for alerts. She apparently had been on the site for minutes when I filled out all the details to see if we could adopt her. I guess with our background, I think that was the decider, really. 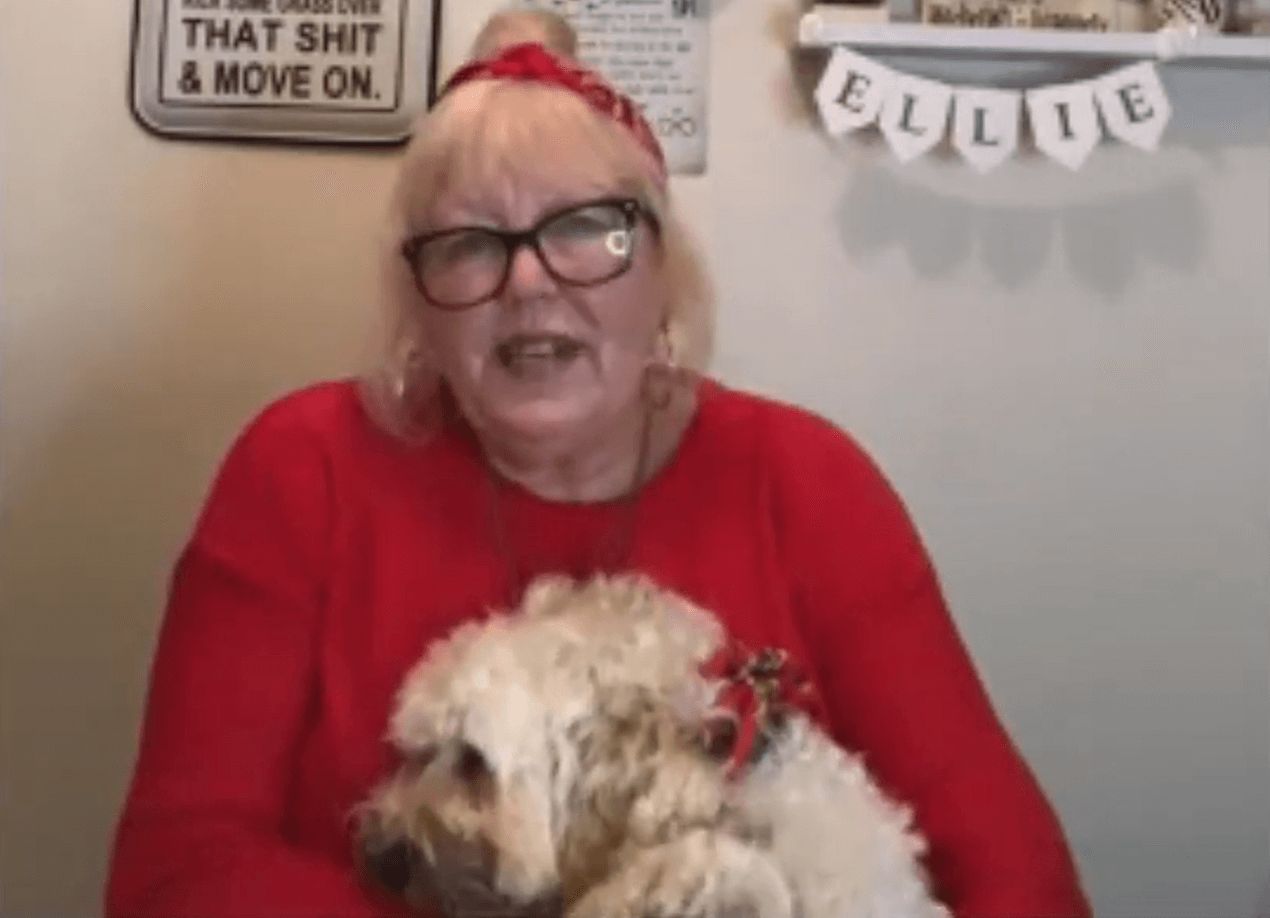 She came from a puppy farm. And luckily, I say luckily, it wasn’t really lucky for her, but on the right-hand side, her ear here, although I’ve let this bit grow, that’s where her ear stops because it was bitten off. And we agree with the vet. The vet felt that it was probably bitten off because she was in with maybe older puppies or older dogs and they were vying for food. So of course, then she became unsellable and that’s how she ended up in rescue. But I can’t say too much because this rescue takes quite a few dogs from puppy farms, and I don’t really want to sort of kibosh anything for them. But we had about a three hour drive to go and get her. Then I just could see that she was special. I mean, this little dog is absolutely amazing. Goodness knows, I’ve worked with a lot of dogs in my time, but as soon as she sees the camera come out, she knows that she’s going to be working. She’s got such a sense of humor, and I’ve tried to put that through my pen as to what I think she’s thinking.

Well, you can see she’s just a dream.

What has been your favorite brand collaboration to-date?

I’ve done so many. Probably, I think my favorite, and the reason it’s my favorite is because it’s quite revolutionary, and it’s a company called Everence. They’re an American company and they contacted me to see if I would like to try one of their bits of jewelry. You can do jewelry or tattoos.

Related: A brand I am working with has been locked. What does this mean?

They put DNA into either a tattoo or a piece of jewelry. I didn’t fancy the tattoo, but I thought how wonderful to have Ellie’s DNA, while she was alive, in a bracelet, and I jumped at the chance. I’ve been working with them now for quite a few weeks and it’s turned out really well. But it’s very rare that we do a collaboration that we don’t enjoy. I’ll be perfectly honest with you, there is no way that I would collaborate with a company that weren’t ethical or that we didn’t feel would enrich or enhance an animal’s life.

I am very particular about that, and I will tell the brand. Because, I like to look into brands that I work with, and if I just feel it’s not for me, then I’ll just say, “I’m really sorry, but it’s not something really that I think we could do justice.”

What are some of your goals for 2021 as it pertains to your influencing and blogging endeavors?

I think what I’d really like to do is, I’m in the process of setting up a YouTube channel. So, that should be fun. I’m not very good with technology, so that lets me down. I’m just literally learning how to do reels now after months and TikTok I’ve still not mastered. But what I want to do is, Ellie and I were invited to a couple of dog friendly hotels before the lockdown. I don’t know. Are you locked down in the States at the moment?

It varies from state to state. Some states are more strict than others right now. Most have reopened to some degree where there’s limitations in place, but you can go out.

Okay. Well, we’re on hard lockdown down here. So we’ve had to put that on the back burner. But I think once this pandemic is under control, well, I’d like to do some traveling with Ellie to hotels. But I also, because I did do a few things with the BBC, I did a broadcast from one of the rescue centers, which I absolutely loved, so I’d like to mic myself up and visit a few more rescue centers and put the footage on my IG TV just to make people more aware of maybe considering adopting rather than buying.

I mean, Ellie cost us 200 and I think it was £20, and she’s health checked. I think she was wormed as well. She hasn’t been spayed yet. She should have been, but of course here, vets can’t do spaying or any basic surgery at the moment. So they’re only dealing with emergencies, which is a bit of a pain because we have to watch her. She’s only had one season now, but the last thing I want to do is to add to the overpopulation of dogs. But that’s what I’d like to do this year.