Why Should Influencer Marketing be a Part of Your Strategy?

In the first post of this 14 part series, I set out to provide a fairly comprehensive explanation as to ‘what’ influencer marketing is. In this post however, I want to cover why it absolutely needs to be a part of your plans. Yes, I’m biased; let’s get that out of the way — I’m CEO of Intellifluence, which specializes in matching up influencers and small businesses to create product reviews that result in sales.

Are you ready for the pitch?

I’m going to repeat a graph from Tomoson that I used previously. According to their research, the quality of customers acquired from influencer marketing was higher. 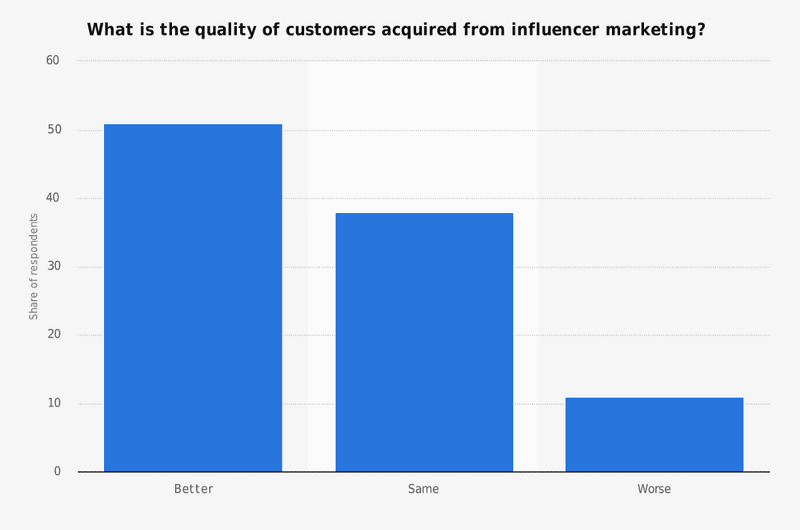 This sentiment is echoed by Khidr Suleman of PR Week, which showed that peer level influence had the highest level of engagement of any of the Instagram marketing campaigns performed. The efficacy in this case had to do with an increased time commitment of peer influencers [micro-influencers], which created a greater level of engagement due to the closer relationship between influencer and audience. This actually ties back around to the Tomoson data because consumers that purchased based on peer influence will churn less frequently than those responding to a non-personalized, non-tribe oriented marketing campaign — the sense of unity and belonging as a psychological trigger has been activated; like any consumer, if the product and service offered has issues, you can’t expect to keep them engaged and happy, but holding all other variables equal, the efficacy of peer influence has a noticeable edge due simply to a lower expected churn rate and higher repeat purchase rate.

Efficacy of spend would seem to indicate then that these types of marketing campaigns are going to be inherently cost effective from a ROI perspective, but it gets better. Since the cost to acquire peer (or micro-influencers if you prefer) is substantially less expensive than hiring a celebrity, one is able to iterate faster and at a lower market fit cost using traditional A/B testing methods. Using peer influencers as a test bed can actually help you figure out your ideal buyer personas quicker, which can then be used in any of your other marketing plans.

How to Determine Buyer Personas

I covered how to build content marketing plans to influence buyers and how to use influence to drive your content marketing, both of which involved understanding the buyer persona; here’s a not very quick way to determine come possibilities:

2. Research each customers’ social profiles. I used to recommend Vibeapp, but it was purchased by Fullcontact recently, so you might need to use a tool like that if you don’t already have his or her social profiles.

3. For each customer, who does this person aspire to be? Who are the heroes being followed, regardless of subject matter expertise? This can be figured out by sorting on raw follower count — the aspirational influencers tend to have larger counts relative to the normal population.

4. Who influences the customer on your particular subject matter? This can be more difficult to determine sometimes, but across a handful of customers you might find 1 or 2 clearly authoritative figures that are experts in your field, or are at least perceived as experts.

5. Who are your customers’ peers? This is the easiest piece, thanks to tools like LinkedIn Sales Navigator. Plug in each of your customers and look at 1st level connections and start drawing comparisons.

6. Iterate. For the large lists of peers you’ve gathered, you’ll now need their social profiles. As you cycle through, start looking for patterns on who is also following the same celebrities and authority figures. Pull each of these individuals into a separate worksheet.

7. On the filtered worksheet you probably have a fairly large number of peers that seem to be influenced by the same celebrities and authority figures. It was exhausting, but this is actually a targeted buying list if you’re so inclined to reach out directly. It is also data you can finally use to build your buyer persona. What are the ages, genders, professions, socioeconomic factors, and interests? You’ll likely be able to segment these individuals into rough groups that now represent who is more inclined to purchase what you’re selling than a random Internet user.

Or…because peer discovery is rather inexpensive, you can simply take your last 100 customers and try to match each up with the influencer that appears the most similar in our system, saving 200+ hours of research time. Buyer persona self-selection in this case works by what on the surface might look like a shotgun approach because it allows you to track which product reviews resulted directly in sales, which not only pads the bottom line, but actually quickly filters random purchases from lookalike purchasing. The beauty is the process can be repeated as frequently as you wish to dial in your buyer personas, and can help you to test out new audiences without a significant spend.

Another huge reason to use influencer marketing, and why some suggest that it is likely to be the future of online advertising, is because it isn’t subject to the current war on ads via ad blockers and anti-ad blockers. Ad blockers may allow an individual to selectively determine which ad networks and ads he or she wants to see, but for the most part, they are unable to filter out recommendations and reviews by influencers. Why is that?

According to Nielsen, 84% of consumers prefer recommendations from friends and family over other sources of influence — this is something that traditional advertising simply cannot reach, despite our collective best efforts by marketers, and is why while technically possible to filter out FTC compliant reviews in the future, most likely it will not happen, because as a culture we rely on our friends and family and want to know their experiences, drawing upon crowd-sourced wisdom.

By now you understand that consumers finding you through peer influence channels are stickier, less likely to churn, and more likely to become repeat customers. This provides not only a brand loyalty opportunity, but also an opportunity to differentiate yourself as a thought leader in your niche. Hearkening back to building out buyer personas, you may have identified several authoritative influencers in the niche that guide your pool of potential consumers for that buyer persona. What would happen if you were to become a peer to those authority figures? By connecting directly with the various authoritative influencers and potential customers alike, you can set yourself up as a thought leader by sharing the information presented by those authorities and getting your information shared by the other authorities — this is authority by proximity; if you are perceived as similar to those a potential consumer trusts, then the probability of earning a share of purchases within your niche increases.

We’ll discuss native advertising and other post-campaign plays later, so for brevity, imagine the following:

1. You engaged an influencer to create a blog product review that was promoted on Twitter. The review, due to Twitter traffic drove enough in sales to make the campaign worthwhile.

2. The influencer’s prominence has actually increased since the initial review and you want to capitalize on that.

Some networks make this scenario really easy to take advantage of — in Twitter, you can sponsor someone else’s tweet, to their audience or to an entirely new audience. Since the initial tweet and review worked well for sales, you already know that it is ideal for your purposes and good content, but even more, it allows you to test putting out the messaging in front of new audiences and in a way that doesn’t look like you’re advertising so much as the influencer is advertising. The influencer continues to benefit from the increased exposure too, so the situation is quite positive.

This is just one network; every network has its own nuances and some ad networks will only like you use ‘content’ as a landing page for traffic; what better content to use than someone’s testimonial for what you’re selling?

Your Competitors Are Already Doing It

A recent article by Shane Barker on Social Media Week touched on multiple reasons why you shouldn’t be ignoring the concept, but the one that should catch your eye is this: 60% of marketers intended to increase their budget for it this year — over half of your competition might already be doing this, and as 2017 comes around, this figure is almost certainly expected to rise. It’s time to get started.

How to Get Started With Influencer Marketing

The quickest and most painless way to start is by registering for free trial. Once registered you’ll be able to test out your buyer persona theories by using our discover influencers tool, pitch these willing product reviewers with free product-for-review offer, and begin collecting your data as the reviews get posted. Within a matter of weeks you should be able to start making educated decisions based on the data you receive and the sales you’ve made by dipping your toes into this lucrative channel.